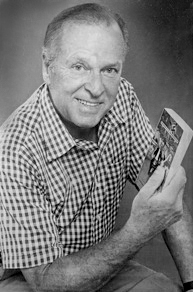 Siebren Erik Hazelhoff Roelfzema was born on the island of Java in the Netherlands East Indies (now Indonesia) the son of plantation manager Siebren Erik Hazelhoff Roelfzema Sr. and Cornelia Vreede. He wrote his first two books as a student at Leiden University, one a bestseller about hitch-hiking through America. He received a law degree from Leiden, where his future career was interrupted by World War II. He joined the Resistance, spent some time in an SS-jail, but in 1941 escaped to England.

After four years of warfare as a Dutch-British secret agent and Royal Air Force pilot, he returned to liberated Holland as Aide De Camp to Queen Wilhelmina.  In 1942 he was knighted by the Queen and awarded the Netherland’s Medal of Honor for his actions in the Secret Service, and decorated with Dutch and British DFC’s (Distinguished Flying Cross) for his 72 missions in the Royal Air Force.

Eventually he emigrated to the United States of America, where he spent a stint as actor in Hollywood, then joined NBC TV in New York. In due time he became part of the “Today” and “Tonight” – shows (Manager, Participating Programs) and ultimately a vice-president. In 1956 during the “Cold War” he  served as Director of Radio Free Europe in Munich.

In 1971 he settled in Hawaii and he returned to full-time writing.   His writing efforts produced the international bestseller “Soldier of Orange” which was made into a movie directed by Paul Verhoeven. The film won the Los Angeles Film Critics Association Award for Best Foreign Film in 1979.  One year later, in 1980, it received a Golden Globe nomination for Best Foreign Language Film.

Early 2006 Erik was approached by producer Fred Boot, who wanted to make a Dutch musical "Soldier of Orange". The premiere took place on October 30, 2010 in the presence of Queen Beatrix and Princess Irene. It has since become the longest running musical ever produced in the Netherlands.

Erik Hazelhoff Roelfzema passed away on September 26th 2007 at home in his beloved Hawaii, at the age of 90.